Over the next two weeks, Cultural Vistas will be sharing photos from our alumni through our (Re)Visit series. Each day, we will focus on a different country or U.S. state that transformed them. These photos stay the same, but our perspectives continue to change.

Thank you to our alumni for allowing us to highlight their stunning photography. We hope these photos inspire you to reflect, remember, and #ReVisit your own experiences abroad.

New York City is the location of our headquarters, but it is not its usual bustling self these days. As a global hub of business and commerce, New York is normally a popular destination for our international interns. Here are some of their favorite photos of New York to give you a glimpse of this wonderful place. Running on the bridge A sunset over Central Park Snow in the park

“After 10 years in sunny Santa Barbara, California, I moved to New York City for graduate school. As a born and raised Minnesotan, I thought I’d handle east coast winters with ease. I was wrong. I spent a lot of my time working as a journalist indoors or trying to find time for warmer destinations in my busy schedule, but two snow boots, four pairs of lost gloves, and one parka later, I was reminded of something: even in the darkest and coldest days, there is always beauty to be found.” “Living in New York has given me the opportunity to be surrounded by people who are accepting and not judging. It has helped me to be who I want to be. It has helped to accept me for who I am and have more confidence. I’ve learned that it doesn’t matter what religion, skin color, height, or size you are. Different is ok, it makes us, us. What matters are your actions. I’ve learned to not change myself for anyone, but also to accept people for who they are, and not making them change.” 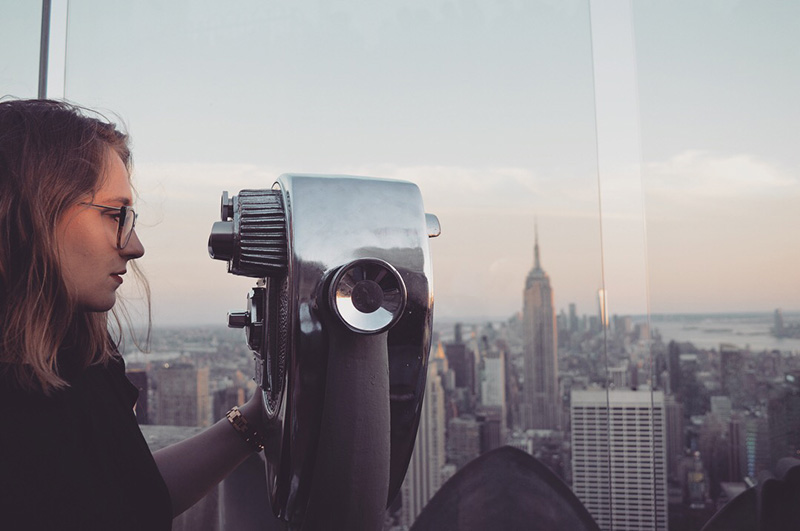 Taking in the city “It was an abnormally warm day of that winter days. Warm and cold breezes that each come from the city of Manhattan and Hudson River were harmonized on Riverside Park. When the sun started to set, the color of dusk, that pinkish and purple glow was constantly deepening. And the glow began to dye the city. I really can say that everything was so harmonized. At that moment I subliminally realize, or rather to say that I made up my mind that I can be too. To me, it was a huge watershed of life in the United States. When the lights of the sky permeated into all around of the New York, the city that I finally can call ‘home’ permeated into me.” New friends in the park “Every picture taken in this city has become a story to reflect on. As an architect working in New York, the cityscape became a true teller of the meaning of history and urban legacy.” A view of the city skyline A subway musician plays the violin The contrast of the city and nature in Central Park Dan and his dog

“Meet Dan. Who is Dan you might ask? He is the guy in the photo. On my first day in NYC, I met him right after I had dropped off my luggage at the place I was staying in Harlem: A formerly affordable neighborhood adjacent to the Upper West Side. Not expecting anything, I exited the apartment building and Dan asked me if I lived there now. I had never met him, nevertheless, I was happy to talk to him and told him that I was staying with a friend at the building, which he also lived in.

Then the transformative experience happened. He asked me if I could take a photo of him and his dog and later send him the result in an email. He did not own a smartphone. I gladly agreed. While we were shooting this photo he explained to me that he has been living in this neighborhood for ages already and sadly realized the changes it is going through. The crane in the background marks the place where a new 50 story building was being built and soon would change the very cityscape he knew and loved. He told me how NYC was changing, how people like Dan, who was part of the blood running through the city’s veins, suffered from the transformation in architecture as those transformations would bring new people into his neighborhood who, because of their buying power, would push people like Dan away. Dan wanted a photo from before the erection of the building, which I took, and would later get someone else to take a photo of him once the new high riser was build in order to show to the council members of the city what is wrong with building higher and higher in neighborhoods that used to be affordable. His activism impressed me and also his persona.

For me, this photo represents the grievances that gentrification causes. It also represents a New York City that people might not see on a first visit. I advocate to listen to people like Dan and not to neglect their voices because of the way they appear. I learned he was an opera singer back in his day. One morning I woke up and heard Dan’s beautiful voice echoing through the back street of the building, I knew it was him and I knew it was a voice of New Yorker that doesn’t accept to be muted by the guys who make the calls.” A view of upstate New York Fireworks over the night sky Sunset over the statue of liberty “As a Muslim, traveling in New York got me to understand that the fear I thought was real had diminished by personal experience because New York is not as bad as what media say towards Muslims and minorities. New York is just a big city full of surprises. Everyone is welcome.” “I truly became a part of this metropolitan, melting-pot city that for some reason felt quite detached and entirely different from the rest of the United States, but then again so very American at the same time. It felt like all of New York is a stage and all of the city’s people are merely actors. For a brief moment, it was my time to perform on this stage, and be a part of the play, tell my story. To be a part of the buzz of the big apple really shaped and changed my perspective of New York. The city made me appreciate individual people’s stories more and wonder which direction everyone is going. Proud to say that I feel a little bit like a New Yorker now, not like a mere tourist or at least to understand what it feels like to live and wander through the maze of concrete Jungle like NY, where you encounter and experience insane, weird, beautiful or inspiring things every day.” Are you remembering, reflecting, and (re)visiting your own experiences abroad? Share your story with us.

Anthony Naglieri
Senior Director of External Affairs at Cultural Vistas
For more than 15 years, Anthony has stewarded integrated communications for a diverse set of institutions – spanning everything from a major U.S. military academy and professional/collegiate sports entities to higher education and internally-minded NGOs and causes.